Intrinsic Attributes of Built Form Assemblage
JavaScript is disabled for your browser. Some features of this site may not work without it. 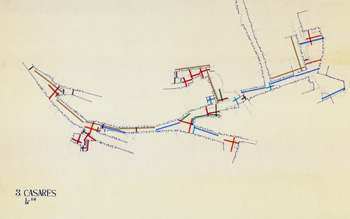 Digitized images from the teaching, research, and projects of MIT Professor Maurice K Smith. Archive supported by an initial grant in memory of William and Miriam Meehan.


“No, I hope I wouldn’t teach unless I thought that there were understandable principles and directives to set up the life of built definition.” —Maurice K. Smith

This image archive is created with the purpose of bringing to a larger audience the work and theories of Maurice K. Smith, Emeritus Professor of Architecture, MIT. Born in Hamilton, New Zealand in September 1926, his educational arc would take him to study at the Massachusetts Institute of technology on a Fulbright scholarship in 1952. He came to see the work of Frank Lloyd Wright, unsatisfied with his perceived provincialism of the educational system in New Zealand. After a brief sojourn back to his native land to practice architecture, he would return to MIT in 1958 and teach in the school of architecture until his retirement in 1996. Early in his tenure, Smith was given control over first year education at MIT. Because of the structure of the curriculum at that time, Smith taught the entire first year and thus had full control over the basis for MIT’s architectural education. Though this was to change only a few years later, Smith’s role during these early years was integral in shaping MIT’s curriculum. He was part of a culture at MIT, prevalent in the 1960s, which saw the future of architecture containing a social consciousness. This generation attacked modernism from within, rallying against the perceived universalizing tendencies and social failures of late International-Style modernism.

Smith’s discourse on architecture was firmly planted in opposition to what he saw as the prevailing modes of modernist international style architecture embodied by such luminaries as Le Corbusier and Maxwell Fry. This modernism, for Smith, was concerned with the design of complete sculptural works of architecture (Smith refers to them as artforms), comprising unities within themselves. That is, there is no need for completion outside of the building itself – the building stands alone as a finality, a work of sculpture independent from its place and site. As a complete object, it as well did not require the active participation of the experiencing subject – only a static one that was left to appreciate the form, not to participate in the form’s completion. The effect of this, Smith saw, was an architecture devoid and dead of any interest in which the experiencing subject became a secondary concern to the formal completion of the designed object.

To understand his work, Smith is adamant that you do not look to the architecture in order to understand its form. This is because proceeding in such a fashion would deny the possibilities he seeks to create and risks understanding the architecture as a form that is disconnected from the experience of it through space and time. What is first important, Smith tells us, is an understanding of the concepts behind the work. So this is where we will begin. Smith was highly influenced by the writer Charles Olsen’s writing “Projective Verse.” This is an attempt to understand the application of field theory in literature. Olsen’s writing was of “open form” as opposed to the “closed,” linear form that governs most literature. In his projective verse writings, words are arranged is such a way both spatially and temporally so as to deny any linear reading, opening the text to any number of potential readings and finding its form only in how the reader chooses to make it. The hope was that this would give rise to a democratizing practice of reading, one free from hierarchy and constraint.