Collection of Research Photography by Professor Jean Jackson
JavaScript is disabled for your browser. Some features of this site may not work without it. 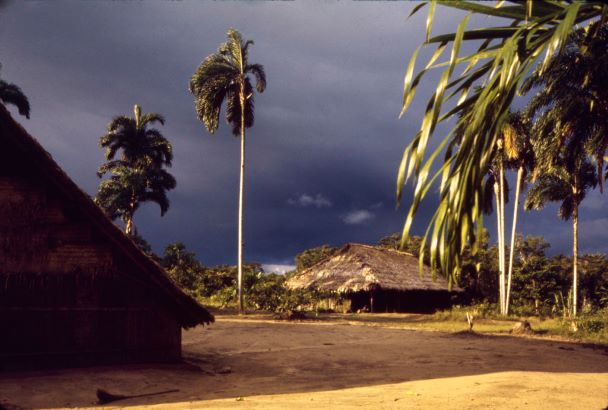 This collection of photographs relates to Jean Jackson’s field research among indigenous people of the Vaupés, Colombia, part of the Central Northwest Amazon, a region that straddles the Colombia-Brazil border. They were taken between December, 1968 and October 1970. They document in particular the people living at the settlement of Púmanaka buro, “hill of many leaves” on the Inambú River, a tributary of the Papurí River, part of the Amazon basin, near the Brazilian border and north of the equator.

Jackson’s fieldwork began in Mitú, on the Vaupés River, the administrative seat of what was then the Vaupés intendencia (somewhat equivalent to a “territory”); it is now a department, a unit similar to a state in the United States. At that time Mitú’s population was about 700 inhabitants, many of them posted there to administer to the region’s indigenous population: government administrators and clerks, Catholic clergy, employees from the Ministry of Health. With the exception of photographs from the mission town of Acaricuara, anthropologist Irving Goldman, and three Americans (a linguist and two photographers) who visited Jackson in Púmanaka buro, all photographs of non-indigenous people in this collection were taken in Mitú.

The terrain was tropical forest, part of the Guiana Shield, characterized by rapids-filled black-water rivers. Travelling by canoe from Mitú, Jackson needed six days to reach her fieldwork site; one trip, when the river levels were very low, took her 10 days. Population density at the time was approximately 0.2 per square kilometer; settlements, many at that time consisting of a single longhouse, were isolated. The image descriptions refer to the indigenous inhabitants collectively as Tukanoans; the language family is known as Eastern Tukanoan. Arawakan languages are also spoken in the region. Jackson’s original research proposal was concerned with health, traditional medicine, and concepts about the body; she changed her focus of research, deciding to investigate the linguistic exogamy system, which is unique in the world. Linguistic exogamy refers to a system that requires marriage outside of one’s patrilineal descent group; these groups are each associated with a distinct language. Jackson refers to these groups as “language groups.” Each language group—there were over sixteen—was associated with various identifying symbolic markers, but language was, at least in the Papurí basin at that time, the most salient.

The photographs indicate patrilineal affiliation, when known. Púmanaka buro was a Bará settlement; all the males and unmarried females were Bará. The in-married women were from other patrilineal groups—most often Tuyuka. Other patrilineal exogamic language-affiliated groups mentioned in the captions include Tukano, Desana, and Siriano.

For inquiries about this collection contact Visual Collections at MIT Libraries: rvc-all@mit.edu